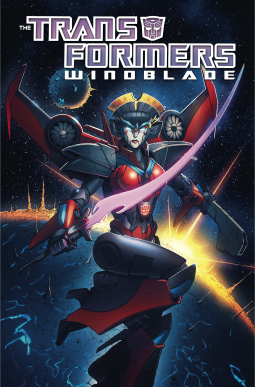 It’s that time of year…you know…that crazy season for comics and graphic novels. That time of year…. when the very word Comic Con… conjures up the superhero in all of us. With Comic Con Conventions happening around the United States… you can’t help but unleash your superhero altar ego…And now…it’s time for this girly girl to expose her altar ego and her love of comics and graphic novels.

And what better way to pay tribute to one of my fondest childhood memories…and of course…pay homeage to (Hasbro's) Transformers 30th Anniversary…then...well...write my very first comic book review on “Transformers Windblade” gifted to me by Diamond Book Distributors and IDW Publishing.

In the aftermath of Dark Cybertron, Windblade takes the planet by storm! But where did she come from — and what does her secret mean to the future of the Transformers?

Now you don’t need to read Dark Cybertron to enjoy this, it has a great starting point, and this can pretty much stand on its own for new readers. Transformer Windblade marks a new era for Transformers, and for those of you new to the scene, Windblade is the newest member to the Transformer family and this bot… is a woman. Now before you start sending me emails about Transformers being gender~neutral….well…we all know that’s not true.

A little side bar…In 2013 Hasbro, in anticipation of the Transformer’s 30th Anniversary in 2014...Hasbro held a fan-based bot poll in which the chosen bot will receive its own toy and its own four issue comic book run. Now Windblade is not the first female Transformer…there’s Arcee and Elita… but I guess I would say Windblade is now the celebrity of the female Transformers because she is the first…female bot….or if you prefer femmebot...created by the fans for the fans. What's even more amazing...Windblade was created by a team of all women...that's right...it's about time the secret was out...women are the real superheroes.

The Universe has nearly come to an end and now 6 months later... but not to worry, you will fall right into place with the storyline. Everything that you expect from the writers of Transformers is still intact...just more awesome... so you will not be disappointed. The writers are definitely taking Transformers to a new era where the characters are really getting an opportunity to have their own identity. And if you think you have to say good-bye to Windblade after issue four...don't worry...she'll be back!