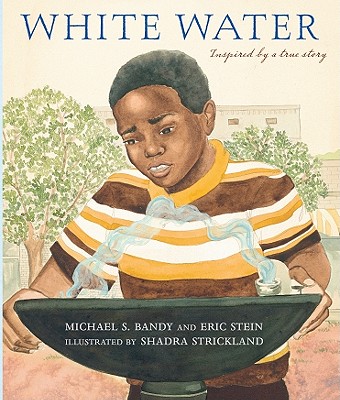 "White Water" made its debut in 2011 and it is inspired by a true story…the story of Michael S. Bandy… one of the co-authors of this book.

White Water tells the story of a young Michael excited to take a trip into town with his grandmother. What makes this children’s story unique is that it is set during a time of segregation where black and whites had to use separate facilities.

However this story is more than Michael getting a taste of water from a white only fountain, this story is about segregation through the eyes of a child. I think this book can serve as an amazing tool to teach young children about a time in our American History where equality was not so equal.

I think the Authors Michael S. Bandy and Eric Stein did an excellent job telling this story in the form of a children’s’ book. The illustrator Shadra Strickland did an excellent job with her illustrations…making this book a keepsake that you would want to past on from generation to generation. This is no doubt a phenomenal book…A book that I think that every child should have an opportunity to read at least once.

And for those of you who haven't had the pleasure of seeing the White Water movie trailer here's a link that gives you a preview of White Water the movie---->http://vimeo.com/116876993

You can also find my Book Review for White Water on the YouTube Video Below...
And on Good Reads.