james cardona: Santa vs The Aliens 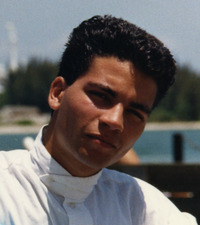 He also loves tinkering with computers, electronics and building robots and is a mentor for FIRST Robotics FRC Team 316.

James also helps organize and run the PSEG Salem County Math Showcase which he created back in the year 2000, a math competition for students from grades four through eight, typically attended each year by approximately 500-600 students.

He lives in Southern New Jersey and works as a Senior Test Engineer for the Laboratory and Testing Services group of Public Service Electric and Gas company. For the 2014 Holiday Season, James Cardona’s book “Santa Claus vs The Aliens” has a new look and James Cardona and I sat down and talked about the inspiration behind the book.

Nerisa E. Waterman: What was your childhood like? What did you do for fun? Any unusual hobbies?

James Cardona: I grew up in a medium sized town / small city named Lorain, Ohio. It's about 20 miles outside of Cleveland and sits on Lake Erie so I obviously enjoyed swimming and fishing. However, anyone from Northern Ohio can tell you that the summer there lasts about two weeks so those were short lived activities. What excited me then, and still excites me now, is creativity and technology. If I could merge those two, then I was really happy.

I was the kid that wrote his first computer program at ten, built his own synthesizer from scratch at about twelve (it only played a few notes, sorry to say) and I had a small side business of painting graffiti on the back of jean jackets through my high school years. I was very much into this new thing called hip hop (but not necessarily rap) and the whole DJ thing, break dancing and graffiti phenomenon. It was the 1980's, what can I say.

Nerisa E. Waterman: Were you an avid reader as a child? If so, what genres of books did you enjoy reading? Any Specific favorites?

James Cardona: Absolutely! I devoured everything from comic books to classic literature. I had a sizable collection of the classics, everything from Dickens to Upton Sinclair to Bronte to Poe and on and on… I read them all. I wasn't a big fan of Middle-English, Shakespeare and the like, as I didn't have the patience for it at the time.

I also loved pulp adventure stories and science fiction. My father gave me most of his old books, so I read all of those also: Ian Fleming, Len Deighton, Asimov, Vonnegut, Heinlein, etc. Probably a lot more I can't remember.

To pick a favorite would be difficult for me… Back then I don't think I had one.. but I do now. Interestingly enough (I have no idea why) I gravitated to male authors then, while I tend to really like the writing of female authors now. I don't know if that is a coincidence…Ursula LeGuin, Margaret Atwood and Lois Lowry are my biggest inspirations at the moment.

Nerisa E. Waterman: What was it that started you on your writing path?

James Cardona: It was a kind of circuitous path for me. I also have a degree in Religious Studies so back in 2004.. or maybe 2005.. I was preparing for a Bible study and I thought it might a be good idea to publish all the notes to help others who might be doing the same and that turned into my first book. Then I wrote another Christian Non Fiction Book in 2011 and that book was based on a Bible study. I had no interest in becoming a writer at that time.

What happened was that in the second book I wrote about a few anecdotal spiritual experiences that I or other people had. I tried to write these as short stories with all the associated sights, sounds and emotions, and I found that I really enjoyed the experience. I decided to write a Science Fiction Book and did so the following year.

It was a bumpy road from there as creative writing is a lot more difficult to do well than people make it out to be. Now I am working on my sixth and seventh books and I'd love to say that I've figured it all out, but truth be told, I still have a lot to learn.

Nerisa E. Waterman: How did the idea for this book come to you?

James Cardona: For Santa Claus vs. The Aliens I decided to be a little selfish and based the story on the life of my father as a gift to him. I interviewed my father, who is in his 70s, and his sister, who is a number of years younger, asking them to tell me all the details about their childhood in Harlem in the 1950s. They did much more than that, revealing relationship issues, how they felt about their father and much more. I put it all in…basically the entire back story in the book is true. Obviously the Santa and the Aliens pieces were added, but the rest is all based on facts, including the names and places and how they felt about each other and what happened in their family relationship. My father really did live in the children's home and chose to stay thereafter my grandfather remarried, etc.

The idea for the main plot line involving Santa and the aliens is just something that organically percolated in my brain. I wish I knew where all my crazy ideas come from. I keep a note book I call “new story ideas” and there's ideas in there for about fifty books.

Nerisa E. Waterman: Is there a message within the pages of your book that you hope readers will discover?

James Cardona: That would be hard to say without giving away the ending but I will try… Certainly there are elements of sacrifice, love and hints at the human condition. When Santa has a realization of the “true meaning of Christmas”…I don't spell that out… I want the book to speak to everyone, not just Christians. Although the book has a few Bible quotes in it, I really wanted to take the holiday of Christmas and present a universal message that everyone could relate to. Which is…Love can manifest itself in a selfless act of sacrifice.

There are a few other things that have resonated with readers, both kids and adults, especially the abandonment that Edwin feels, even though it is somewhat of his own choosing. The book is not overly emotional, as it is a kid's book after all, but doesn't shy from the disappointment or reality Edwin felt in his family situation.

Nerisa E. Waterman: Do you have any words of wisdom you would like to share with aspiring Authors?

James Cardona: I've been asked this question before, but without trying to sound humble, I don't really feel qualified. Although I have a lot of fans and my books generally receive very positive reviews, I have yet to hit it big. My sales have been modest…I am quite certain I haven't figured out the marketing angle of this game, and most authors say that they spend 50% or more of their time doing that, what I can speak to is the writing part.

Probably the biggest lesson I would give people is: don't be afraid to edit heavily. I remember the first time that I deleted an entire chapter of a book that I was working on, I almost cried. I had spent several weeks on it and was emotionally invested. But it just didn't work. It needed to go. Pushing that delete button was a difficult task, but it gets easier.

The second lesson is to really try to listen to critiques, reviews and feedback, no matter how hostile they may sound. I think I've probably learned the most from people who hated something that I had written. It's not the reader's job to buy our books and give us great reviews. It's the writer's job to give the read a blow-you-away… steal-your-face story… that they can't help but tell everyone about. It's our job to take them to that magical place, and, if we've really succeeded, it changes them; they come back from their journey just a little bit different and better. Nerisa thank you so much for reading my book and inviting me to your interview series.

Nerisa E. Waterman: James Cardona thank you so much for being a part of my interview series. I loved your book Santa Claus vs The Aliens so much that I had to do a little book trailer… which I included in the bottom of this blog post. Also I would like to tell our readers that you have agreed to kindly gift an autograph copy of Santa vs The Aliens to some lucky winner as part of my holiday giveaway…Stay tune for more information. In the meantime, if you go to www.Smashwords.com you can download an Ebook of Santa vs The Aliens for 99cents using coupon code AU53Q and by using this link ---> https://www.smashwords.com/books/view/465062

Thank you again James Cardona for joining us on the “Holiday Author Interview Series” and to my readers I hope you enjoy the book trailer and the book Santa vs The Aliens.