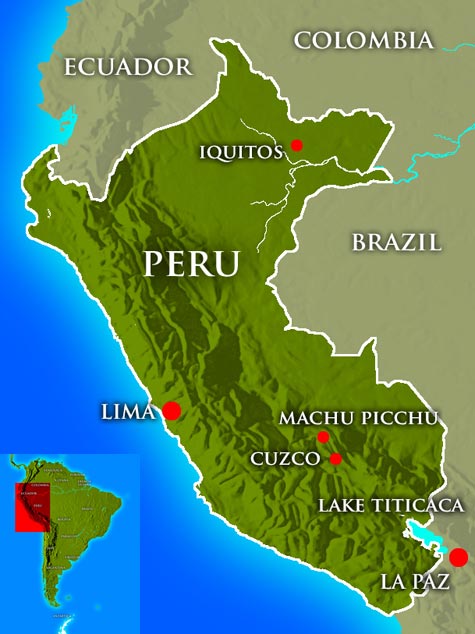 Officially the Republic of Peru (Spanish: República del Perú,pronounced: [reˈpuβlika ðel peˈɾu] , is a country in western South America. It is bordered in the north by Ecuador and Colombia, in the east by Brazil, in the southeast by Bolivia, in the south by Chile, and in the west by the Pacific Ocean. Peru is an extremely biodiverse country with habitats ranging from the arid plains of the Pacific coastal region in the west to the peaks of the Andes mountains vertically extending from the north to the southeast of the country to the tropical Amazon Basin rainforest in the east with the Amazon river.

Each meal is a love story… love of history…love of family…love of culture…and love for our islands. The beautiful fruit, provisions and seafood...well...is just a small taste of the love letter the island has written for us in return…And today is my love Letter to Peru.

Today our i-netradio.com studio kitchen is your plane ticket to Peru and its culinary world….not only in the kitchen… but on the streets, with its street food recipes…and in the bar, with a drink recipe. So what’s on the menu?

Pisco Sour (beverage) and some street food: Coco Cola Chicken Wings, Deep Fried Plantains, Fried Yucca and of course we have to have Ceviche…it’s Peru after all...and last but not least...Patarashca (Grilled Fish).  I decided to go off the beaten path and try something new and start out with making our signature drink first....and a little "Toro y Mata" on the Ipod.

The Pisco Sour is a cocktail native to Peru. The main alcoholic element – Pisco – a  grape liqueur.  The basic recipe is very simple with just four key ingredient

honey or corn syrup or even a simpe syrup depending on preference and ice.

Blend these all together in a mixer and serve in a glass and you have a minimal Pisco Sour.

Two elements that are commonly added to the cocktail but not essential are the cinnamon or Angostura, and a quarter of an egg white which provides the characteristic foam.

Other alternative versions of the drink found in Peru which add extra flavors and fruits to enhance the drink and cater to different tastes.

I actually like to use Riesling Wine in my Pisco Sour.

{Pisco Sour with a twist (Wine)}

1. Combine all the liquids in a shaker and shake.

2. Muddle 10 white seedless grapes in an old fashioned glass, add ice and contents of the shaker.

When I was reviewing a Peruvian cookbook I came across this recipe, the author indicated that it was a recipe his great aunt claimed was her own but he suspected the origins came from a local restaurant that served various versions of sweet and sour chicken. The only thing I changed about the recipes is that I used chicken wings instead of thighs and drumsticks

• Salt and Pepper to taste

Preheat oven to 400F/200C and arrange chicken in roasting pan.

Mix all the other ingredients in a bowl and pour over chicken. Cover with aluminum foil and bake in the preheated oven for about 30 minutes, basting with juices after 15 minutes. If looks too dry added about a tablespoon or two of water…we don’t want your wings to burn.

After basting return to the oven for another 15 to 20 minutes until the chicken is slightly sticky, the skin is crisp, and the sauces has reduced to syrup…

Ah!...Ceviche!…the very word is like music to my ears…the ying to my yang…

Although popular in the Latin American countries... Ceviche…is this Virgin Islander’s favorite dish to eat.

A seafood dish popular in the coastal regions of the Americas, especially Central and South America. The dish is typically made from fresh raw fish cured in citrus juices, such as lemon or lime, and spiced with ají or chili peppers. Additional seasonings, such as chopped onions, salt, and coriander, may also be added. Ceviche is usually accompanied by side dishes that complement its flavors, such as sweet potato, lettuce, corn, avocado or plantain. As the dish is not cooked with heat, it must be prepared fresh to minimize the risk of food poisoning. The origin of ceviche lies in the area of present-day Peru.

• 1-2 habanero peppers, cut in half, without seeds and deveined

1. Cut the fish into small cubes, place in a glass bowl and cover with cold water and 1 tablespoon of salt, cover and refrigerate while you prepare the onions and juice the limes.

2. Rub the thin onion slices with 1/2 tablespoon of salt and rinse in cold water.

3. Rinse the fish to remove the salt

4. Place the cubes of fish, onions, and hot peppers in a glass bowl and pour the lime juice over the ingredients. Sprinkle with a little bit of salt. To minimize the acidity of the limes you can put a few ice cubes in the mix.

6. Remove the cilantro sprigs and the hot peppers from the mix. Taste the fish ceviche and add additional salt if needed.

7. Use a slotted spoon to remove the fish and onions from the lime juice mix and place in a serving bowl, sprinkle with olive oil and finely chopped cilantro.

8. Serve immediately with your choice of sides and garnish

Peel the plantains and cut them lengthwise on the diagonal into thin slices…as thinly as you can possibly cut them. I use a potato peeler.

Heat the vegetable oil to 350F/180C. Working in batches we are going to fry the plantains until golden brown. Drain in paper towels season with salt. Eat immediately

1. If using fresh yuca, peel the yuca, cut into large pieces, and remove the fibrous inner core of the root.

2. Bring a large pot of salted water to a boil and cook yuca until it starts to turn translucent and can be pierced easily with a fork, about 20-30 minutes. Drain thoroughly.

5. Carefully remove yuca from pan and place onto a plate lined with paper towels. Sprinkle yuca with kosher salt  and serve hot.

This is a traditional Peruvian dish that I have cooked a few times…it works best with a grill outside but it is just as flavorful using a stovetop grill or a grill pan.

½ cup of olive oil for drizzling

Preheat the grill to low.

Mix onions, garlic, oil, pepper, cumin, hot pepper, cilantro and salt. Fill the inside of the fish with this mix, wrap fish with banana leaves tie it with a string. Place them in the grill for about 15 minutes until done.

So there you have it...your one way ticket to the culinary world of Peru ...I hope you enjoyed the recipes... and for a little inspiration I included the YouTube Video of "Toro y Mata" below.